Living on an hourly wage and worrying

John Cochran has seen generations of students pass through Indiana University of Pennsylvania — not from any classroom, but from the dining halls where he’s been a cook for 36 years.

The job uncertainty that he and hundreds of food service workers now face at IUP and more than half a dozen State System of Higher Education campuses might be overlooked in debates about professor cuts, university mergers and classroom quality.

But those hourly workers, employed by outside contractors and themselves facing possible consolidation, are central to unease over something else — the economic health of towns where the system’s 14 universities are located, from California and Edinboro in the west, to East Stroudsburg and Kutztown in the east.

Each community depends not only on student and university spending but also on campus employees who shop and pay taxes in their communities. The 100-plus jobs tied to feeding IUP students are part of a systemwide workforce that is poised to shrink.

Already, 186 union-represented faculty face layoffs, two-thirds of those at IUP where enrollment is down 33% in a decade to just over 10,000 students. Cuts are expected elsewhere as the 14 campuses with almost 96,000 students confront shrinking high school graduate numbers, decades of lax state support and, now, a pandemic.

Mr. Cochran, 57, of Punxsutawney, married and a volunteer firefighter, isn’t getting rich off the $35,000 or so he makes a year but says he is grateful for his health insurance — especially in a pandemic. He wonders if State System leaders understand the fear of losing that. 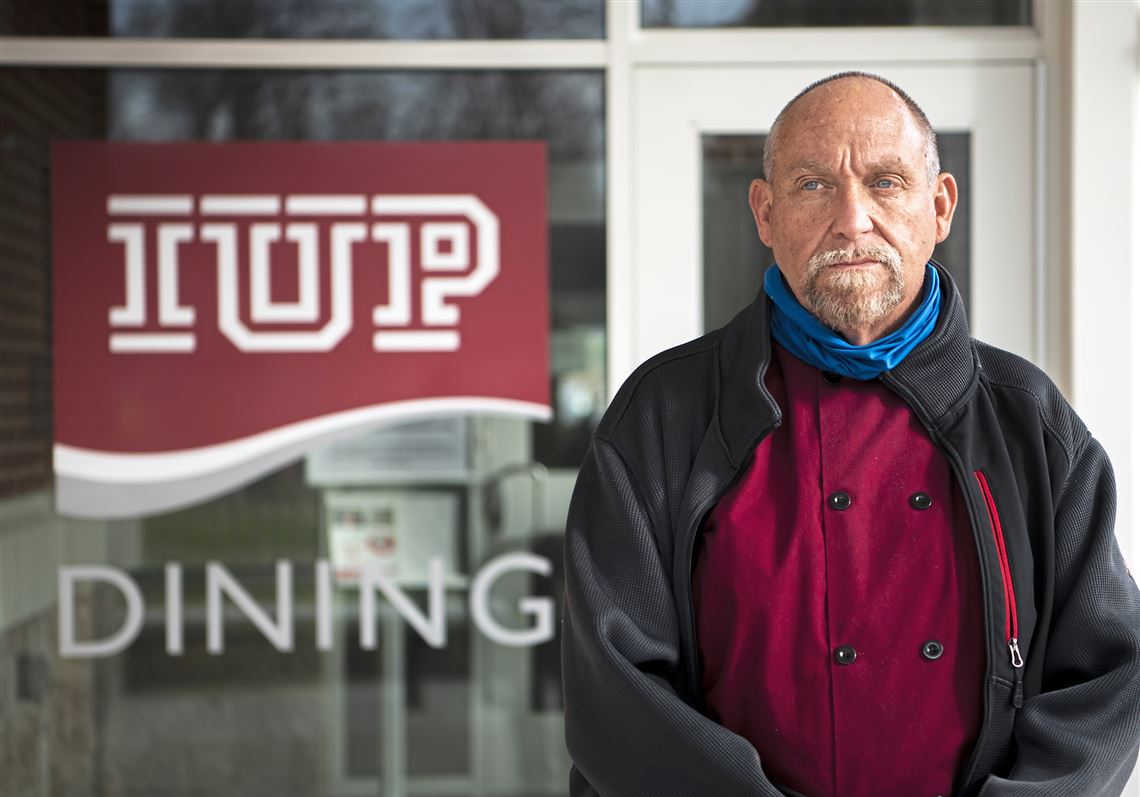 “If they were in our shoes, how would they feel about the changes and the uncertainty?” asked Mr. Cochran, vice president of the Pennsylvania Joint Board of Workers United, the union representing food service workers on six State System campuses.

They face added uncertainty since most dining hall workers are not directly employed by the universities but instead work for companies whose bids for campus contracts can turn on paring labor costs.

Aramark, his employer, provides an hourly union wage and benefits. But there’s no guarantee another firm won’t win the contract this winter and try to oust the union and slash jobs and compensation.

Even worse, his union says, the State System seems willing to let that happen.

In written responses to dining contractor questions about the existing collective bargaining agreements in Western Pennsylvania, the State System replied:

“… Please understand that the posted (request for proposals) does not dictate whether or not the dining services contractor utilizes union workers. That is entirely up to the contractor.”

David Pidgeon, a State System spokesman, confirmed the bid process on campuses in the east and west. “The fate of union jobs lies with the contractors,” he said. “The State System does not decide whether the eventual contractor hires union workers.”

Systemwide, there are 1,300 food service employees, and all but those at Millersville University work for outside firms, Mr. Pidgeon said. All but Clarion and Kutztown are unionized.

In Western Pennsylvania, a single vendor would feed students starting next fall on campuses, including Edinboro University, IUP and Slippery Rock universities, according to Workers United, an affiliate of the Service Employees International Union that represents workers at Edinboro and IUP.

In Eastern Pennsylvania, a single food service contractor would serve six or seven universities under one agreement. Three of them — Cheyney, Lock Haven, and East Stroudsburg — are represented by Workers United.

Bruce Bobbins, a representative for the union, said wages vary but on average are about $14 an hour. The dining hall workforce shrinks when schools are not in regular session. Mr. Cochran said he often works summers for additional income.

In petitions, his union colleagues want State System Chancellor Daniel Greenstein and university presidents to ensure that “any contractor who takes over food service operations at their school retain the existing workforce and honors the union contract …. laying out wages, benefits and seniority,” according to the union.

“We are the hardworking men and women who feed students day in and day out,” read one petition signed by IUP workers. “We have a union contract that ensures we are paid fairly, treated with respect and provided with benefits that help us take care of our families.”

The IUP petition says that workers at Clarion, not currently in a union, should be granted a fair process to organize to secure the same protections, and warned that the union is prepared to act if union contracts are threatened.

“We are well aware of how unfairly many nonunion food service workers are treated and how poorly they are compensated,” the petition states. “We will do whatever it takes to preserve the fair treatment, pay and respect we have fought for!”

The State System officials cite severe pressures of their own, in a state that typically ranks 47th or 48th in taxpayer support for higher education leaving it largely dependent on tuition. And there are fewer students paying that right now.

Mr. Greenstein and other leaders say system redesign, including combining six of the 14 campuses, will create efficiencies enabling them to cut student costs by as much as 25%. The chancellor called that goal “audacious” but he has received mixed reviews.

At a General Assembly hearing last month, Mr. Greenstein listened as lawmakers alternately lectured that the system is not an employment agency, but that it also must be mindful of how university cuts affect surrounding communities.

“The broader community are significant stakeholders,” said Rep. Austin Davis, D-McKeesport. “There’s certainly going to be an economic impact that many of these communities are going to face because of less foot traffic, less staff.”

Mr. Greenstein said State System universities will always support these college towns, but added, “Not acting is no longer an option.”

At IUP, Mr. Cochran can see that things are tough.

Switching to remote learning in March and to hybrid instruction due to COVID-19 meant dining halls once packed now hold maybe a few dozen students. Food must be served in Styrofoam containers, and knives, forks and spoons are handed out in packages.

Empty dining seats are lost income, and room and board refunds have cost each university.

‘I understand they are hurting, too,” Mr. Cochran said. “The whole world is hurting.”

Governor Tom Wolf’s and Our Members at Majestic